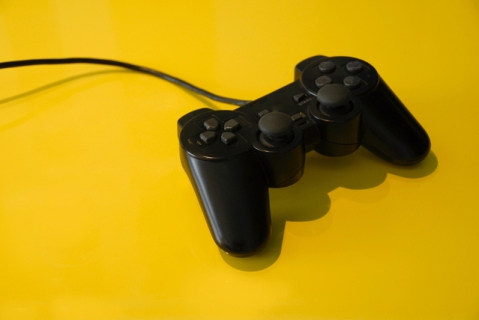 Children are very industrious. They are notorious for spending more time playing with the box the toy came in, than the actual toy. Which is why when my five-year old picked up a broken game controller and proceeded to have her Daddy “control” her, it was comical. She would squeal with laughter after a command of ” take two steps to the right, take three steps down the hall”. This little game ensued for a few minutes and it struck me that we do this as adults. We willingly hand a controller to people and allow them to dictate our steps, thoughts and emotions.

Too often this is the scenario. The Lord never intended for us to give this tremendous amount of power to another human. To allow another person to control your thoughts is spiritual bondage. A loss of focus on Jesus is crushing to our spirits. When your thoughts are consumed with negativity, bitterness, and anger – it is time for a heart check up.

We give so much control to people, allowing them to infiltrate our minds, that we take the power away from God. Thinking on the corrupt seeds that Satan has planted, instead of the seeds of truth. In a way we tell God that He isn’t mighty enough to guide us. He isn’t big enough to conquer what I face on a daily basis.  We focus on people and all the hurt, pain, sadness and disappointment. We have handed them the controller.

You see, my daughter knew her father was controlling her during this little game. How often though, are others unaware that they have a vice-grip on your mind? Too often we have handed that control over and the other person doesn’t even know. A feeling of defeat sets in. An inability to perform daily tasks without being consumed and controlled. The bad seeds have sprouted. I can not believe she said that to me. Her husband cares more for her than mine does. My kids don’t behave as well as hers. She had the nerve to not speak to me first. Who does she think she is? He should have fixed that by now. I wish he would pay more attention. He doesn’t show enough affection.

God longs to guide us, not control us. He has mercifully  walked ahead of us and lovingly cleared a path. Do not allow someone else to interfere with your personal walk with our Lord. A mind focused on all the things wrong can not accomplish anything. Decide to give God your thoughts and steps. Take the controller back.  A man’s heart deviseth his way: but the Lord directeth his steps. Proverbs 16:9

It is simple really. We complicate matters. God, our Divine Potter, has molded us to His particular specifications. Our human nature won’t allow us to see the masterpiece He has created. A conscience decision has to be made to see the beauty He has created in us.

Number of Times God's Glory Shined From this Blog